Praise for the Series

"Exceeded my expectations. It blew me away. I will definitely be picking up the next one."
—Night Owl Reviews

"I fell into this novel head over heels. The author's description of the mansion is sheer bliss to read of, and a murder to go with it is always appreciated by a mystery fan. Don't miss this one."
—BookLoons 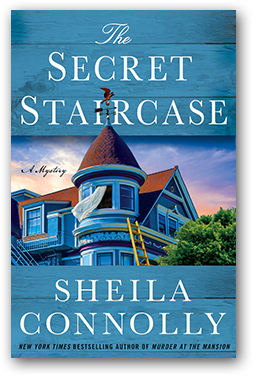 Kate Hamilton is feeling good about her plans to recreate Asheboro, Maryland as the Victorian town it once was. The town is finally on her side, and the finances are coming together. Even two recent murders aren't enough to discourage her: after she helped to solve them, she put them behind her.

Now comes the time to make real plans, and her first goal is to renovate the Barton Mansion on the outskirts of town. Luckily, it's been maintained in good condition in the century since the wealthy Henry Barton lived and died there. So the only substantial change she's planning is to update the original kitchen so that it can be used to cater events in the building. But when the contractor gets started, he discovers a staircase that had been walled in years earlier. And of course, given the way Kate's luck has been going, there's a body on the stairs.

After the first shock, Kate is relieved when the autopsy reveals that the man had died around 1880. Unfortunately, it also reveals that he had not died a natural death—he had been murdered. And the questions remain: who was he and what was he doing there?

So Kate and Carroll Peterson, who Kate had drafted to sort through Henry Barton's papers, start a hunt to identify the man and why he died at the Barton Mansion. But when a second body is found—this time from the present day—Kate realizes that someone may not be so keen on her digging up the past... 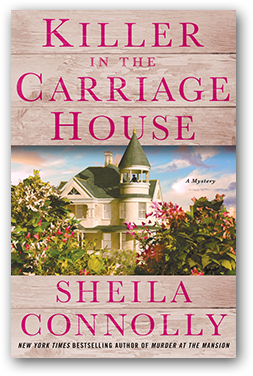 Killer in the Carriage House

Welcome back to Asheboro, Maryland, where real estate can be a matter of life and death. Killer in the Carriage House is the second book in the Victorian Village Mystery series from New York Times bestselling author Sheila Connolly.

Coming back to her hometown was never on the agenda for hotelier Kate Hamilton. But when she's offered a chance to lead the charge of transforming the landscape into a Victorian village and tourist attraction, Kate can't quite refuse. The only problem? Nobody in Asheboro has the passion, or the funds, to get plans off the ground... until Kate teams up with handsome historian Joshua Wainwright, who has ambitious ideas of his own involving an old mansion and a treasure-trove of documents that could attract investors and help seal the deal.

Then, just as Kate and Josh seem ready to pull the trigger, a dead body turns up in the town library. Do these mysterious papers spell danger instead of dollars? That's what Kate intends to find out before all bets are off... and someone else ends up six feet under. 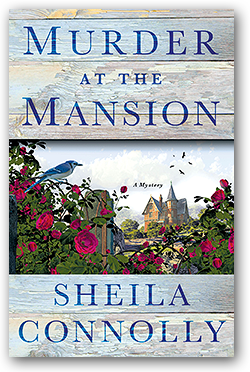 Murder at the Mansion

Katherine Hamilton's goal in high school was to escape from her dead-end hometown of Asheboro, Maryland. Fifteen years later she's got a degree in hospitality management and a great job at a high-end boutique hotel in Baltimore. Until, that is, the hotel is acquired by a chain, and she's laid off. When Kate's high school best friend calls with a mysterious invitation to come talk with the town leaders of Asheboro, she agrees to make the trip, curious about where this new opportunity might lead.

Once Kate arrives, the town council members reveal that their town is on the verge of going bankrupt, and they've decided that Kate's skills and knowledge make her the perfect person to cure all their ills. The town has used its last available funds to buy the huge Victorian mansion just outside of town, hoping to use it to attract some of the tourists who travel to visit the nearby Civil War battle sites. Kate has less-than-fond memories of the mansion, for personal reasons, but to make matters worse, the only person who has presented a possible alternate plan is Cordelia Walker—Kate's high school nemesis.

But a few days later, while touring the mansion, Kate stumbles over a body—and it's none other than Cordelia. Kate finds herself juggling the murder investigation and her growing fascination with the old house, which itself is full of long-hidden mysteries.